It’s been an exciting week for Raggy Charters whale watching team. Killer whales are rare in the Algoa Bay area due to their extreme roaming behaviours and tendencies not to remain in a specific area for long. The first sighting of the week could have easily escaped the Raggy Charters team also – it just so happened that one of their tour operatives was on a personal fishing trip when he encountered the pod and informed the rest of the crew! Overrun with excitement, the team rushed to the scene of the sighting and encountered a magnificent pod of 8 individuals, including males, females and calves. According to the Facebook post published after the sighting, this was only the third encounter with orca in Algoa bay in the past 3 years so everyone felt extremely privileged to have experienced it.

However, Raggy Charters’ luck was far from depleted, as only a week later they had yet another extraordinary encounter with the killer whales. This time a separate smaller pod, distinguishable by a male with a unique dorsal fin. The first signs of orca activity in the area was a fleeing pod of Indo-Pacific bottlenose dolphins that show flight behaviour towards predators, however nobody expected to encounter the predators themselves mere minutes later. Jake from the Raggy Charters crew provides an explanation for the sightings, suggesting that the increase in killer whales could be correlated with the increase in humpback whale calves they have seen this year. Orca have a high success rate hunting the calves so a successful breeding season for the humpbacks provides the orca with the perfect hunting ground to train their young.

← Our resident Risso’s dolphin family is back! How Artificial Intelligence is Helping us Understand Sperm Whale Migration →

END_OF_DOCUMENT_TOKEN_TO_BE_REPLACED 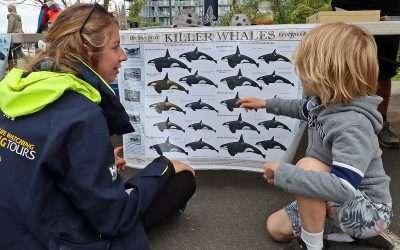