After spending my first week on the boat and getting to know the people and the area, I came to the conclusion that spreading the message of the #neteffect to passengers on board was going to be a challenge. The majority of passengers were Argentinian and spoke no English – and I did not speak Spanish. I needn’t panic though as my fellow intern Kevin arrived and I felt I had that little bit more confidence with a sidekick (who also didn’t speak Spanish!). After some discussion we decided that beach cleans were an effective way to get people’s attention and as for passengers on the boat, we had to work with what we had and aimed to talk to as many English speaking passengers as possible.

This week I finally met with Romina Botazzi, one of the owners of the company. We discussed the #neteffect and ideas about how to raise awareness and also the problems we were facing with the language barrier. Kevin then headed out on the next trip with Romina, on his return he told me how Romina had spoken to everyone on board in Spanish about the campaign and in turn everyone cheered and clapped Kevin for his work! Brilliant result! Over the next couple of days, Romina continued to introduce me and Kevin to the people on board and this even encouraged some Argentinians to practice their English and ask me questions about what I was doing on the campaign.

One particular day this week I went on a trip and there happened to be two girls from England called Anna Hickman and Kendal Archer – my first English passengers!! Obviously I spoke with them about the campaign and they couldn’t have been more interested! It really makes me happy to meet people who are as enthusiastic as I am about it. As it turns out Anna works for the Climate News Network whose stories get picked up by the likes of The Guardian, and they were currently doing an article on whale entanglement. I gave her as much information as I could on the campaign and got her in touch with Dylan Walker (WCA CEO)… It’s amazing to think that just by talking to that one person, the message of the #neteffect can be spread to so many others… This coincides with Rose Anne’s earlier blog post about the ripple effect; I think she hit the nail on the head with this.

A little about the Southern right whales… What can I say? These animals are incredible, fascinating and majestic and the more I see them the more I fall in love with them. I may be bias but I think I’ve ended up in the best place in the world to see these whales. They can be so curious with the boats and often approach us, coming so close that if you reached out your hand you could probably touch them. This curiosity however, is what nearly drove the species close to extinction in the years when whaling was a legal activity; it also gives the whale its name as the whalers used to say they were the “right whale” to kill as it was so easy for them to do so. It makes me happy to know this species is now increasing approximately 7-8% per year. 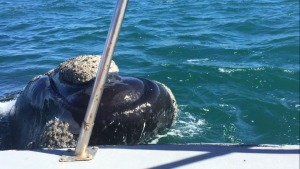 My first couple of weeks here may have started slowly but day by day I feel confident that the campaign is growing; with more social media output, support from all the staff at Tito Bottazzi, increasing public outreach and more and more beach cleans, I really feel this thing is going somewhere.

← The Reach of Ripples Backpacking, Welsh To... →