After 18 hours flying and 21 hours on a bus, I finally made it to Puerto Piramides, the small but beautiful town in the south of Argentina. After quickly dumping my bags at my new home Bahia Ballenas Hostel, I hurried down to the Tito Bottazzi office to meet everyone. I will be volunteering at this company for the next four weeks, working on the whale watching boats speaking to people about the #neteffect campaign and raising awareness on the issue to people from around the globe.

After introductions were made I was told to go on the next boat trip; this was my first trip and I was excited and curious as to what I would see. Pablo, one of the captains from Tito Bottazzi, invited me to stand on the higher level of the boat so I had a better view of everything. We travelled for around ten minutes under the clear sunny sky and across the clear, mirror-like Atlantic ocean until we saw the unique v-shaped blow of the Southern right whale. We travelled slowly towards the whale before stopping to witness this beautiful animal swimming majestically in it’s natural environment. After a few minutes the whale became very curious of the boat and I could not believe how close I came to the animal on only my first trip and how clear I could see it under the crystal clear water. 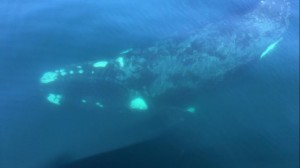 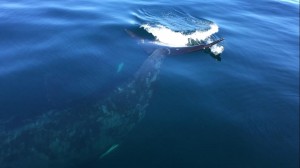 After a few moments of watching the animal, we headed off to another part of the bay. All of a sudden hundreds of dolphins appeared out of nowhere; a mixture of dusky and common dolphins filled the ocean switching direction rapidly, chasing their food. Then a huge tail belonging to a Southern right whale calf appeared out of the water and began to hit the surface over and over; at the same time another calf began slapping its pectoral fin repeatedly on the surface. The reason for this playful behaviour is to communicate with their mothers who were most likely diving for food, leaving their calves at the surface as they have to breathe more often. After an hour and a half of being surrounded by Southern right whales, calves and dolphins and there playful behaviours it was time to say goodbye and head back to the shore.

This was by far the best whale watching experience I had ever been on and I can’t wait to spend the next four weeks here witnessing the amazing wildlife that fills the Golfo Nuevo (New Gulf) here in Puerto Piramides. I’m also looking forward to carrying out beach cleans and seeing how much ghost fishing gear I can find here on the beaches, as well as speaking to the public about the issues of entanglement. I’m hoping to raise lots and lots of awareness for the #neteffect campaign with the help of the team at Tito Bottazzi; Romina, Miguel, Carlos and the rest of the staff here who have been more than welcoming!

← What a welcome! The Reach of Ripples →