After what felt like a lifetime of flying I arrived in Port Elizabeth. The sun was out and I was ready for bed! I arrived at my accommodation in Seaview and was blown away by how stunning it was! Who doesn’t want the ocean on their doorstep? The house belongs to the founder of Raggy Charters and my boss, Lloyd Edwards.
Raggy Charters was founded in 1992 and is thought to be the oldest eco tour company in Africa. The company not only takes the public on unique educational tours but it also plays a huge part in the conservation of Algoa bay .The profits from the tours are used to fund the Bay watch project and the ongoing penguin research. This allows great research to be done on some of the unique wild life found in Algoa bay, such as, the endangered African penguin and native Bryde’s Whale. The company also takes great pride in running conservation projects such as planting a tree for every trip to counteract carbon footprint of the tours. Therefore I was excited to get started with the net effect campaign!
After a good nights rest it was time for my first trip out! Once we had all the guests checked in Lloyd gave the brief about what Raggy Charters is about and then it was all aboard Orca 2. 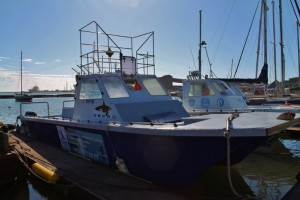 Safety briefing done and we were heading out to St Croix Island. On Route we had our first encounter, the blow of a humpback whale and because one wasn’t enough, a second blow. 2 humpbacks within the first hour! Their elusive behaviour meant we didn’t stay long so when one fluked and dived we carried on towards St Croix Island. 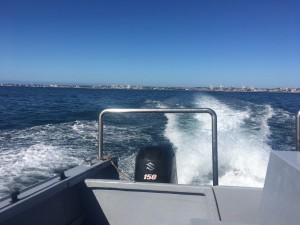 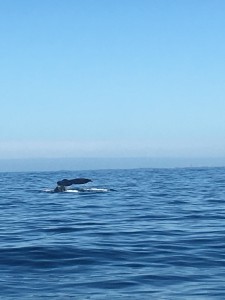 (Looking back toward Port Elizabeth from Orca 2)            (Humpback fluking south of Croix Island)
As we continued there were groups of penguin dotted all around, I soon learn that groups of penguins are called “rafts”. Surrounded by rafts we arrived at St Croix Island. 22,000 African penguins populate this island and it was an amazing sight. However the excitement of seeing these penguins was dampened by the fact this penguin population has decreased by 90% in the 20th century. 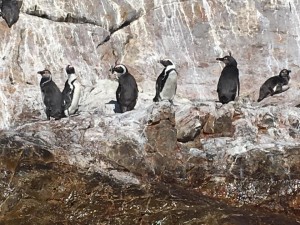 The decrease in population is thought to have been caused by numerous factors but the most current problem is thought to be due to over fishing around St Croix Island. Research funded by Raggy Charters has shown that fishing of the area means penguins have to go further for food, which in turn, decreases the survival rate of both the chick and the adult.

After we had spent 20 minutes with the penguins we headed back towards the shore. To our luck on the way back we heard from one of the land-based cetacean spotters that they had seen dolphins just off the beach so off we went. 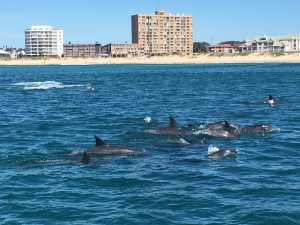 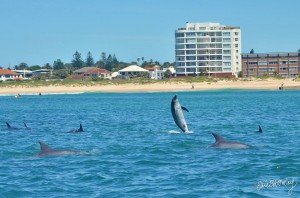 As we were approaching I expected some dolphins an then I received the best welcome I could ask for; 300 indo-pacific bottlenose dolphins. They surrounded the boat, leaping, spinning, flipping and splashing; it was almost as if they could sense my excitement. After our incredible encounter we headed back to port.

Thank you Port Elizabeth for an amazing welcome! I can’t wait to work with Raggy Charters to educate and conserve Algoa bay and to introduce the Net Effect Campaign to your cruises.